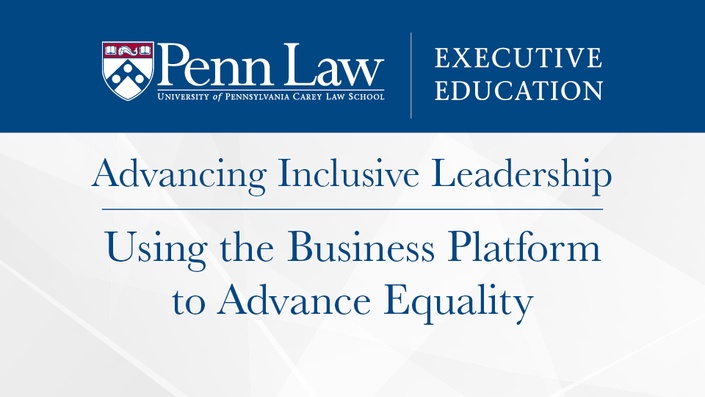 Panel on Using the Business Platform to Advance Equality

Joshua Bixby has served as the CEO of Fastly since February 2020, and served as its President from May 2017 to February 2020. He has been on the executive leadership team at Fastly since December 2015, and served in a part-time advisory role since 2013. From February 2013 to August 2013, Bixbyserved as Vice President of Acceleration at Radware Ltd., a cybersecurity and application delivery solutions company. He served as President and co-founder of Strangeloop Networks, a web application acceleration solutions company, from June 2006 until its acquisition by Radware in February 2013. From October 2002 to April 2006, Bixby was a co-founder, President and Chief Executive Officer of IronPoint Technology, Inc., a content management software solutions company. He is the founder of Stanley Park Ventures, an early stage foundry based in Vancouver, British Columbia. Bixby earned his B.A. in Management and Business Economics from the University of Toronto.

Natalie Jabangwe is currently the youngest chief executive to run a mobile money business in Africa. Her company, EcoCash, is Zimbabwe’s leading and fastest-growing mobile money service and was the 2017 corporate recipient of the Mobile World Congress “Best Mobile Payment Solution” Glomo Award. With over 11 years of experience in fintech, she began her career as a software engineer, eventually moving to Investment banking and retail banking sectors, across the EMEA region. Prior to joining EcoCash, she was a Senior Mobile Financial Services Consultant at a Fortune500 company, NCR Corporation, where she developed NCR’s digital financial service strategy across 52 countries. Jabangwe is a seasoned researcher and enthusiastic digital strategist with deep financial services and technology development experience.

She qualified with a B.Sc. in Information Technology and an Executive M.B.A. (specialization in Hi-tech Strategy and Corporate Turnaround) from Imperial College London, UK. She is a 2017 Oxford University Tutu Fellow and a member of YPO Africa. In 2018, Jabangwe was named one of World Economic Forum’s Young Global Leaders and was ranked #14 on the Choiseul 100, Africa Emerging Leaders.

René Lacerte is a fintech entrepreneur and the founder and CEO of Bill.com, one of the nation's leading business payments networks. At Bill.com, he works with some of the nation’s largest banks and accounting firms to redefine how business payments are made. Lacerte founded Bill.com in 2006 after recognizing that business owners needed a way to simplify payments so they could focus on their business.

He is a fourth-generation entrepreneur and has over 20 years of experience in the finance, software, and payments industries. Prior to Bill.com, Lacerte founded PayCycle, the first and largest online payroll solution which was acquired by Intuit in 2009. Early in his career, he spent five years at Intuit, growing its bill payment and credit card businesses and launching Intuit’s first connected payroll product.

Lacerte was an E&Y Entrepreneur of the Year national finalist and the Northern California winner in 2017. For seven years in a row he has been named one of the 100 most influential people in the accounting industry by Accounting Today. He is a graduate of Stanford University, where he received an M.S. in Industrial Engineering and a B.A. in Quantitative Economics.

Conrado Tenaglia is the U.S. managing partner and co-head of the Latin America practice of Linklaters LLP, a leading global law firm with more than 2,700 lawyers and 29 offices around the world. He has over 20 years of experience in cross-border corporate finance transactions with a special focus in Latin America and Spain. Tenaglia has advised governments and companies in the region when accessing the international financial markets, undertaking strategic transactions and managing their legal risk. He is qualified to practice law in New York State, England and Wales, and Argentina.

Tenaglia is a graduate of the University of Buenos Aires and Harvard Law School.

Amy Weaver is the President and Chief Legal Officer of Salesforce. She leads the legal, compliance, internal audit, security and government affairs teams at Salesforce. She is a member of the company’s executive committee.

Prior to joining Salesforce, Weaver was executive vice president and general counsel of Univar Inc., where she was responsible globally for all legal and corporate affairs, governance, corporate transactions, compliance, litigation and employment law matters. Previously Weaver was senior vice president and deputy general counsel at Expedia, Inc. Weaver practiced law at Cravath, Swaine & Moore and at Perkins Coie LLP. Prior to entering private practice, she served as a legislative aide to a member of the Hong Kong Legislative Council and as a clerk on the U.S. Ninth Circuit Court of Appeals.

Weaver has a J.D. from Harvard Law School and a B.A. from Wellesley College.