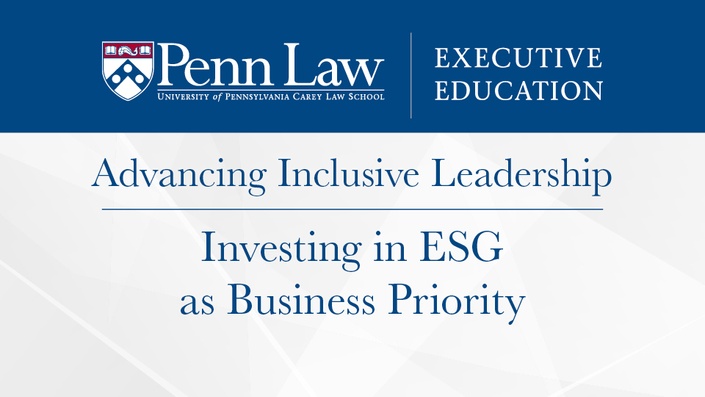 Investing in ESG as Business Priority

Panel on Investing in ESG as Business Priority

Suneel Gupta teaches innovation at Harvard University and is the author of the upcoming book, Backable (Little Brown, 2021) – exploring how to get people to believe in your ideas. The book is rooted in Suneel’s journey from first-time entrepreneur to being named “The New Face of Innovation” by the New York Stock Exchange. Gupta’s ideas have been backed by firms like Greylock and Google Ventures, and he served as an Entrepreneur in Residence inside Kleiner Perkins Caufield & Byers. He has personally backed startups including Impossible Foods, AirBnB, 23&Me, Calm, and SpaceX. In 2019, he established the Gross National Happiness Center of America in partnership with the Kingdom of Bhutan.

Andrew Kandel is the Global Chief Compliance Officer, Senior Legal Officer and Senior Managing Director at Cerberus Capital Management. Kandel joined Cerberus in 2007, and oversees compliance for Cerberus and its global operations. He is a member of the Compliance and Risk Management, Allocation, Brokerage Selection, Valuation, Securities Compliance, and Financial Risk Management Committees. He is also the Chairman of the Firm’s Environmental, Social, and Governance (ESG) Committee.

As Global Chief Compliance Officer, Kandel works with the Firm’s business units and its professionals worldwide to ensure Cerberus is maintaining the highest standard of compliance and ethical behavior. He has been instrumental in integrating best practices into the Firm’s day-to-day operations, including through the development of a robust compliance program that, among other things, regularly monitors activities and conducts trainings to ensure the safeguarding of the Firm’s integrity and reputation. In addition, he leads Cerberus’ ESG efforts and is a key driver in incorporating ESG into the activities of the Firm, its portfolio companies, and investments.

Prior to joining Cerberus, Kandel was First Vice President and Assistant General Counsel at Merrill Lynch, where he was in charge of state regulation, legislation, and government relations and also handled various SEC, NYSE, NASD, and compliance-related matters. From 1995 to 1998, he was the Chief of the Investor Protection & Securities Bureau at the New York State Attorney General’s Office, where he also served as Assistant Deputy Attorney General, assisting in oversight of the Antitrust, Charities, Consumer Fraud, Civil Rights, Environmental, and Real Estate Finance Bureaus. From 1993 to 1995, Kandel was Senior Special Counsel, then Trial Counsel, at the Enforcement Division of the New York Stock Exchange. He was also an Assistant District Attorney in Manhattan for seven years.

Megha Parekh is the NFL Jacksonville Jaguars’ senior vice president and chief legal officer. She is now in her eighth year with the organization. She joined the Jaguars as vice president and general counsel on March 1, 2013, before being promoted to her current position in 2016.

Parekh manages the legal, technology and people development teams at the Jaguars. Her group is responsible for employee training, support and development; technological systems and support for the office and certain systems in the stadium and at the amphitheater; and all legal matters, including transactions, compliance, disputes, risk management, government relations, and insurance. Since joining the Jaguars, Parekh has worked on Shad Khan's acquisition of Fulham Football Club; the public-private funded improvements to TIAA Bank Field, including renovations to the stadium clubs and construction and the 2017 opening of Daily's Place; the extension of TIAA Bank's stadium naming rights; securing Daily's as a naming rights partner for the amphitheater; the selection of new food and beverage and merchandise providers for the facilities; the launch of All Elite Wrestling; and on potential real estate developments around the stadium.

Parekh also serves on the board of the Jaguars Foundation and the Florida Sports Foundation and volunteers with Habitat for Humanity and Crisis Text Line as a crisis counselor.

Prior to joining the Jaguars, Parekh worked in the New York office of the law firm Proskauer, which is an international law firm known for its sports law group. During her time at Proskauer, she worked on public and private acquisitions and financings and securities offerings, including the acquisition of the Jacksonville Jaguars, the Houston Astros (MLB), and the Cleveland Browns (NFL). While at Proskauer, Parekh also worked on a variety of matters including public and private company acquisitions and equity and debt financings.

Parekh was named in December 2012 and 2013 to ForbesMagazine's 30 Under 30 Sports List, which honored the country's top sports athletes and executives under the age of 30 who "represent the entrepreneurial, creative and intellectual best of their generation." More recently, she was selected for Sports Business Journal's 40 Under 40 list in 2018. Parekh has also been named a Woman of Influence (2014) and Ultimate Attorney (2016, 2020) since coming to Jacksonville.

Silda Wall Spitzer is a Principal at NewWorld Capital Group. Before NewWorld, she was a Managing Director at Metropolitan Capital Advisors, an investment firm focusing on value opportunities, where she led strategic and business development. Prior to Metropolitan Capital, Wall Spitzer served as First Lady of New York State. In that role, she worked to support the Administration’s goal of reducing fossil energy consumption 15% by 2015, with her initiatives promoting green buildings, alternative energy, and local food sources. Her I LIVE NY program engaged constituents to create livable communities and sustainable jobs. Wall Spitzer is Vice Chair of the Urban Green Council, the New York Chapter of the U.S. Green Building Council.

Timothy Wilkins is a corporate and M&A partner at the law firm Freshfields based in New York. He is also the global partner for client sustainability.

Wilkins joined Freshfields in 1999, and has been a partner since 2002. He has advised a wide range of Asian, European and U.S. multinational corporations on cross-border M&A, private equity, and joint ventures.

As global partner for client sustainability, Wilkins leads Freshfields’ global sustainability team which comprises leaders from the firm’s transactional, regulatory and dispute resolution practices to advise clients on environmental, social and governance (ESG) matters. He also leads the firm in its partnership with clients, public policy makers and regulators in their joint effort to tackle the broader range of ESG issues impacting business and society.