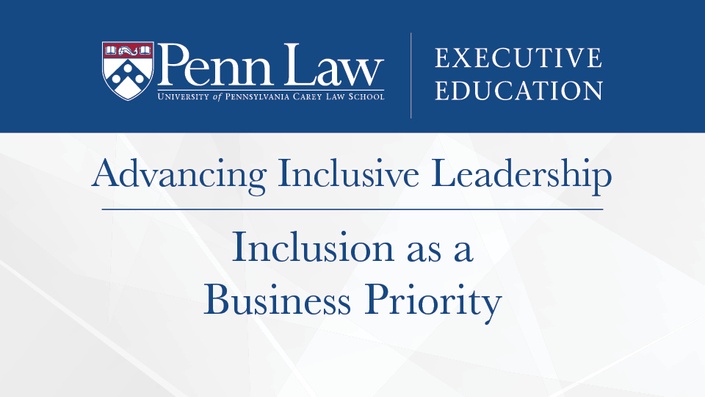 Inclusion as a Business Priority

Panel on Inclusion as a Business Priority

Blake Lawit is the Senior Vice President and General Counsel at LinkedIn. At LinkedIn, Lawit is responsible for legal affairs and public policy across the globe, including regulatory, corporate, commercial, litigation, government relations, compliance, and privacy issues. Since joining LinkedIn in 2010, he has been instrumental to the company’s legal and public policy strategies and has helped to navigate complex litigation and regulatory issues. Before becoming general counsel, he led the teams responsible for litigation, regulatory disputes, antitrust, patent, employment, and legal department operations. Before he joined LinkedIn, Lawit was a partner at Howard Rice in San Francisco, where he specialized in intellectual property and litigation.

He graduated with honors from Harvard Law School and Harvard College.

Mehmood Khan, MD, is Chief Executive Officer and Board Member of Life Biosciences, Inc. He joined the company in April 2019. Life Biosciences was founded to advance scientific research and develop innovative new therapies to improve and extend healthy lives for everyone, including companion animals. The company has built a unique daughter company structure to systematically address eight biological causes of aging, rather than working to treat a series of isolated diseases and conditions that arise with age. Life Biosciences has established a corporate office in Boston, MA, a state-of-the-art research facility in Cambridge, MA, and a cutting-edge technology center in New York City, NY. In his role as CEO, Khan provides strategic direction and operational oversight across Life Biosciences and its six daughter companies. His vision of a more efficient and effective drug development pathway will drive innovation in the science and technology Life Biosciences advances. By leveraging his diverse experience in pharmaceutical, clinical, and consumer industries, Khan is the ideal leader for Life Biosciences through its evolution and emergence as a global leader in longevity research and product development.

Khan previously served as Vice Chairman and Chief Scientific Officer of Global Research and Development at PepsiCo, a Fortune50 company employing upwards of 250,000 employees across 22 brands. At PepsiCo, he played a pivotal role in the company’s global R&D efforts to create breakthrough innovations in food, beverages, and nutrition, including the incorporation of healthier and more nutritious offerings across its portfolio. Khan also oversaw PepsiCo's global sustainability initiatives based on the belief that success in business is inextricably linked to the sustainability of the world we share. Prior to joining PepsiCo, he served as President of Global R&D at Takeda Pharmaceuticals, leading the global efforts of one of the largest pharmaceutical companies in the world by revenue.

Before moving into industry, Khan had a distinguished medical career as a faculty member in endocrinology at the Mayo Clinic and Mayo Medical School where he served as Director of the Diabetes, Endocrine and Nutritional Trials Unit. He also spent nine years leading programs in diabetes, endocrinology, metabolism and nutrition for the Hennepin County Medical Center in Minneapolis.

Khan is a member of the Board of Directors of Reckitt Benckiser, Indigo Ag, the Foundation for Food and Agricultural Research at the U.S. Department of Agriculture. He also serves as Chair of the U.S. Pakistan Business Council and Chair, U.S. Council on Competitiveness in Washington, D.C.

Khan earned his medical degree from the University of Liverpool Medical School, England, and completed a fellowship in clinical endocrinology and nutrition in the Department of Medicine and Food Science and Nutrition at the University of Minnesota, Minneapolis. He is a Fellow of the Royal College of Physicians, London, and a Fellow of the American College of Endocrinology.

Koch-Mehrinis the President and Founder of Women Political Leaders (WPL), the worldwide network of female Politicians. Its mission is to increase the number and influence of women in political leadership.

Before her time in politics, Koch-Mehrinfounded and ran a public affairs consultancy in Brussels, which later merged with a larger US firm. Silvana worked as Senior Special Advisor for EY, and as a Senior Policy Advisor for GPLUS Europe.

In addition to her work for WPL, Koch-Mehrinserves on the board of the Council of Women World Leaders, the network of female Presidents and Prime Ministers. She is a member of the senior network of the European Leadership Network (ELN), and a Board Director of the Social Progress Imperative, and represents the European Union since 2016, in the Executive Committee of W20, an official engagement group of the G20. In 2019, UN Women invited Silvana to join the Leaders of Generation Equality campaign, and lend her voice, impact, and power to supporting Generation Equality from the launch on September 25th, 2019 throughout 2020. In 2018, and 2019, she has been ranked as one of the 100 most influential persons in gender equality by apolitical. She is a regular speaker at institutions such as the UN, OECD, World Bank, and other international fora. Koch-Mehrinis a Young Global Leader Alumni of the World Economic Forum.

Peter Rabley is a Venture Partner at leading impact investing firm, Omidyar Network (eBay). Prior to joining Omidyar Network, Rabley was the founder and CEO of International Land Systems until its recent acquisition by Thompson Reuters.Post-acquisition, he was vice president for global business development and strategy for the tax and accounting government division at Thomson Reuters. He began his career implementing some of the earliest GIS/LIS into metropolitan government in the United States in the 1980s. Over the next decade, he translated this experience into innovative applications for international development as director of GIS/LIS at PADCO.

Rabley graduated from the University of Miami with a bachelor’s degree in economics and geography, as well as a master’s degree in geography.

Kamakshi Sivaramakrishnan is the founder and CEO of Drawbridge, the leading technology company that is fundamentally changing the way in which brands and enterprises connect with people. Under Sivaramakrishnan’s leadership, the Drawbridge team has built the first technology-aided solution that addresses a problem central to all digital media: consumer-trusted cross-device identity. Previously, she was Lead Scientist at AdMob (acquired by Google in 2009), where she was responsible for building much of AdMob’s machine-learning stack. Kamakshi also has the unique distinction of her work being on board New Horizons, NASA’s farthest space mission, to Pluto and the outer planetary system.

She received her Ph.D. in Information Theory and Algorithms from Stanford University. She has been named one of Business Insider’s “Most Powerful Women in Mobile Advertising” three years in a row. In 2014, she was named one of Ad Age’s “40 Under 40,” as well as an Ernst & Young Entrepreneur of the Year Finalist.

Gitanjali Swamy is a Managing Partner at IoTask, an “Innovation of Things” (IoT) company. Swamy has founded, built and served as a board director in successful entrepreneurial or intra-preneurial enterprises with over a dozen fundraisings and acquisitions under her tenure. Swamy has also worked on the sourcing, structuring, and transaction of many investments ranging in size from seed to over a Billion USD. She has held investment or professional roles in global leaders including The Carlyle Group and Booz Allen & Hamilton. She is currently a representative to the United Nations Equals Leadership Coalition, where she leads the working committee on Gender Equitable Investment, Founder/Advisor to the University of California at Berkeley’s [email protected] Women in Technology Initiative, Research Fellow and Director at the Private Capital Research Institute, Harvard Business School, and Board Advisor to several entrepreneurial ventures. Swamy is also currently advising State Senators and Representatives in multiple states on matters related to Private Capital Policy and Regulation. She is also currently involved in launching several public-private partnership efforts in innovative investment for sustainable and participative economic development.

Previously, was an investment professional with The Carlyle Group. Prior to Carlyle, she consulted to Matrix Partners on investment strategy/portfolio incubation. She was a management consultant at Booz Allen and Hamilton advising clients on strategy, innovation, and new business creation efforts. She has helped clients catalyze global innovative public and private sector entities such as MIT's Opencourseware, the Auto-ID Consortium, and the MIT Engine. Swamy has held product or line roles at Mentor Graphics, The Mathworks and senior management positions, including Chairman & CEO, while she led the companies from inception through fundraising, team recruitment to cross-border market development and acquisitions.

Swamy received her B.Tech in Electrical Engineering from the IIT Kanpur, where she was awarded Academic Proficiency Prizes, her Ph.D. in EECS at U.C. Berkeley, where she was an NSF Fellow & President of WICSE, and her MBA from Harvard Business School, where she served as CFO of HBS-SA. She is currently completing her J.D. in Law. She has nearly 25 publications and patents in the fields of data, algorithms, technology, and policy.